Did you know that saffron is the most expensive spice there is?

And that it is more expensive than gold, gram for gram?

That is because it is super labor intensive to harvest and has to be harvested by hand. In addition, it is fragile and difficult to extract. And it only flowers for 3-4 weeks a year.

The saffron spice are taken from threads inside of the flower of the Crocus Sativus Linné plant.

However, despite its high cost, it is gaining in popularity due to its many purposes, both for health and for flavoring of food. 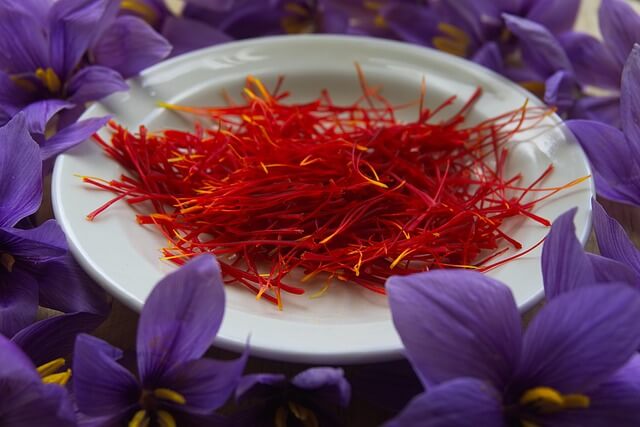 But it is by no means a new ‘thing’. Saffron has in fact been used for thousands of years both for medicinal and culinary purposes.

So what is the mystery ingredient in saffron that produces the health benefits?

The key saffron components are believed to be something called aldehydes (safranal and picrocrocin) and various carotenoids.

And what are the scientifically proven health benefits of saffron?

It has been found to improve mood and fight depression. This has been confirmed in 10 different scientific studies. It has also been claimed in at least one of these studies that saffron regulates the neurotransmitter serotonin just as well as do the pharmaceutical drugs called SSRIs (selective serotonin reuptake inhibitors).

Research has also demonstrated the saffron is a potent antioxidant.

Antioxidants are good because they seek out and eliminate what are called free radicals. These free radicals can cause inflammation, cell damage, DNA damage, can reduce your nitric oxide levels, can reduce heart disease, obesity, cancers, Alzheimer’s disease and diabetes.

Saffron may also have benefits for your sex life. One study have shown that saffron may mediate sexual dysfunction in women who were taking SSRI drugs. And a study also found that 200 mg saffron daily could improve erections in men struggling with erectile dysfunction.

In addition, as an antioxidant, saffron is likely to better preserve your nitric oxide levels. Nitric oxide is directly responsible for helping you produce erections.

So next time you cook, maybe add some saffron..?